some snapshots from the exhibit 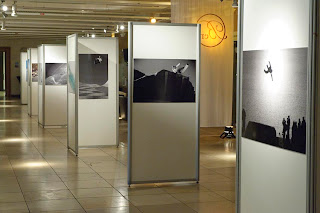 A really nice event was going down in Munich this weekend, the first annual snowboard film festival (and at the same time a little trade show). Hans Herbig and I showed snowboard photographs at the venue which turned out quite nice. Check out some snapshots here on the right.
Trade show was cool, great brands, resorts and shops. The party was killer: DJ Stylewarz, Soulforce and a rap freestyle session with Roger & Schu (Blumentopf) and Roger Rekless.
The best part was watching snowboard movies on a giat IMAX screen. Three days in a row, from early afternoon till almost midnight you could watch classics like Afterbang or Simple Pleasure as well as bangers like That's It That's All and even both of this years Isenseven movies. 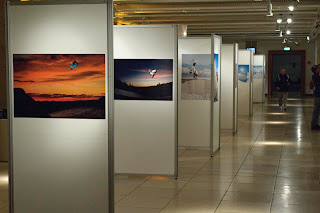 Roger on the mic at the festival party
Posted by Christian Brecheis Photography at 7:51 PM

Would have loved to seen that in person.

Looks like the photos you've got up there are incredible. I can't wait to see what you do next!

thanks for your comments!